It all started with a dream.

Yesterday morning, I was talking to Amanda on the phone (she's in the US, I'm in Kenya).  Amanda said she had a dream that 2,000 wildebeest drowned and that I should go check the river.  Immediately after hanging up with her, I forgot.

At around noon that same day, Charles, the Warden at the Purungat Bridge, called and told me that one thousand wildebeest had died in a crossing that morning.  I was shocked.  Then I remembered what Amanda had told me.  Geemi and I grabbed our gear and we immediately went down to the river.

The crossing that Charles was talking about happened at the Serena Lunch Spot between 8AM and 9AM on September 25th.  We arrived down in that area at around 1PM, grabbed a Ranger, deployed our monitoring equipment, took samples, and counted the carcasses in the river.  We counted 1,510 carcasses in a 3.5 kilometer stretch of river.  Over 2,000 wildebeest likely died in the crossing yesterday, the other 500 floated their way into Tanzania.

Today, another ~2,000 wildebeest died at that same crossing.  We arrived in the area approximately 20 minutes after the crossing started and we counted over 1,300 bodies floating past us just downstream of the crossing. Overall, our total estimate for both events was 3,857 wildebeest.

Why did so many die over the last two days?  A brutal combination of higher than average flows in the river and the wildebeest choosing a bad crossing point.  There has been tons of rain in the Mara over the last week and it has been speculated that the wildebeest chase the rain.  Maybe they're crossing so much right now because of all the spotty showers?  Who knows... 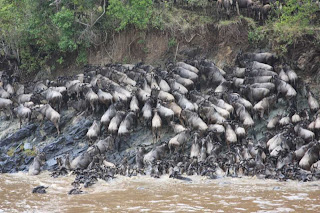 As you can see in this picture, once they get to the other side of the river, there is no way up.  Maybe 50% make it up the hill, and the others drown. 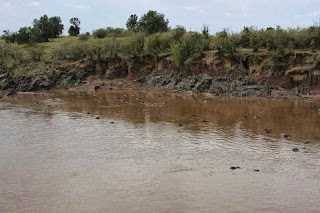 Once they drown, their bodies float downstream and eventually get hung up on rocky outcroppings. 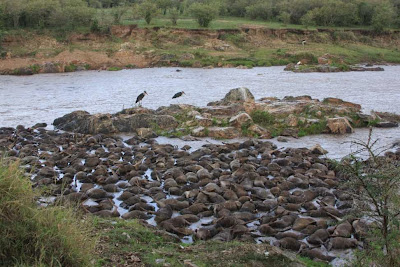 These drownings are a natural part of the system and seem to have been happening for a long time. We found a paper from the 1970's discussing the deposition of wildebeest carcasses in the Mara River. However, the size and frequency of these drownings varies from year to year. We're trying to understand when and where these mass drownings occur and how they impact the river ecosystem.  Even though we've documented a few of them, they are always tough to see.  The sounds of a drowning wildebeest are haunting.

It is exceptionally difficult to witness this...a young wildebeest and their mother...having safely made it across the river and up onto the rocky outcropping...and the mother ends up breaking a leg on the rocks.  The young wildebeest doesn't seem to understand what has happened, and just waits.  We checked back on him four hours later after this picture was taken and he was still waiting.  Heart breaking.... 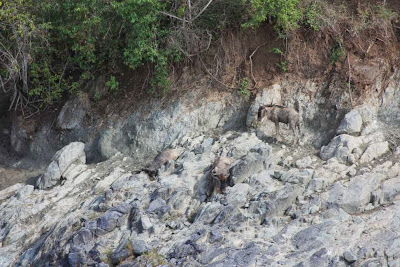 We counted carcasses again this evening.  As of 6PM, there are 1,846 wildebeest carcasses in a 3.5km stretch of the Mara River.

At least 3,857 wildebeest died in the Mara River in the last two days.

Amanda Subalusky is a Postdoctoral Scientist with Emma Rosi at the Cary Institute of Ecosystem Studies and Chris Dutton is a doctoral student with David Post at Yale University. We are studying the influence of large wildlife on ecosystem processes in the Mara River.