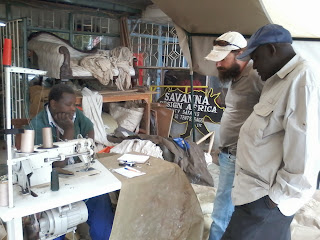 We are planning to conduct an experiment in January using small, artificial stream channels. Scientists use these to experimentally manipulate rivers in a controlled way to understand causes and effects of river processes. They are often made out of metal or fiberglass, but these can be expensive and difficult to transport. Chris came up with the brilliant idea to make ours out of PVC canvas, so today we met with our favorite canvas guys at Savannah Africa Designs to see what they thought. They were excited about the challenge and should have a prototype ready by Thursday!

Posted by Amanda at 3:10 PM No comments:

The Talek River is a pretty, lazy river.  The quality of the water in the Talek is a little "off" sometimes for a variety of reasons.  But....it makes for some great pictures. 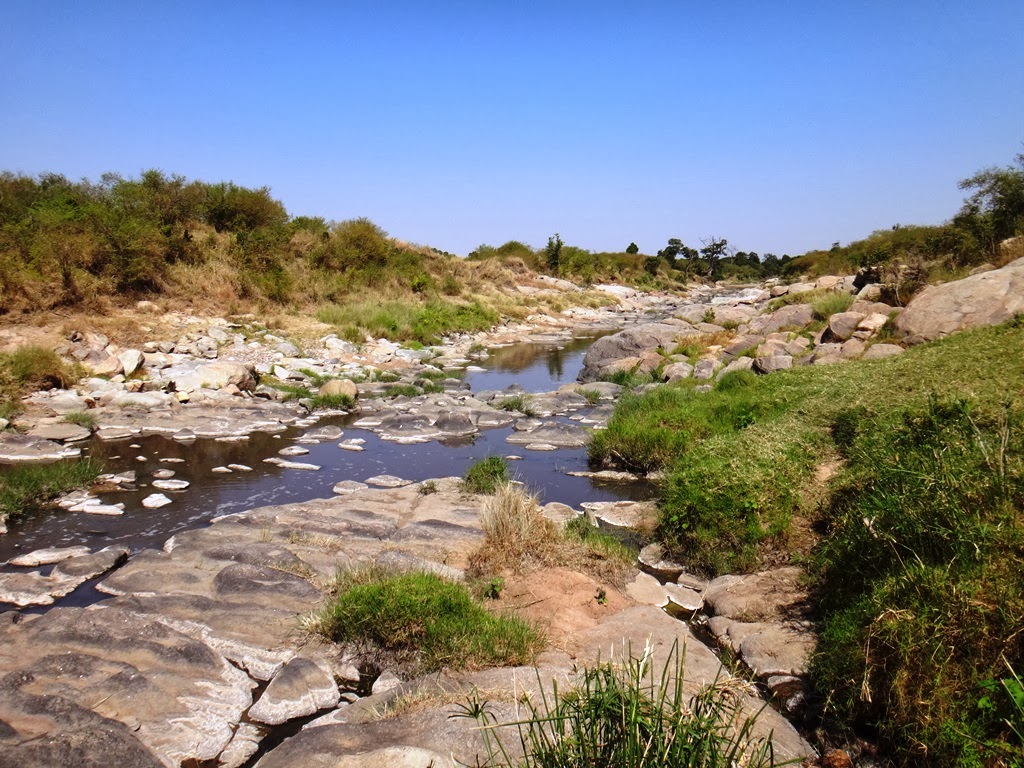 If you're glued to our website (like I'm sure many of you are), you must have noticed that the Talek came up a bunch last night.  Here is data from our custom built automated data logger on the Talek.  It started texting us last evening at around 7PM to let us know the river was rising.  The river rose over 4 meters in 4 hours! 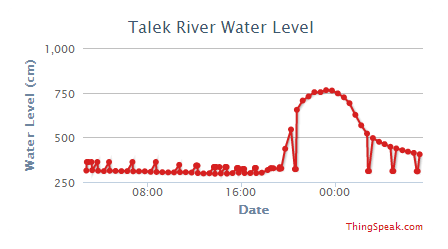 I'm still working out some of the bugs (some of the dropped values in the graph)...but it is nice to have live data.

Posted by Unknown at 7:54 AM No comments:

Gambling on the Rain

Over the last few years working in the Mara, Chris and I have noticed a very interesting pattern. After the river has been low for a while, the next big rainstorm will usually bring a flushing event that will result in a crash in dissolved oxygen and sometimes an associated fish kill. In general, we believe these events are due to the flushing of large amounts of carbon, and associated microbial activity, through the system. However, we are still testing several hypotheses about where exactly all this carbon comes from. It could be from the scouring of hippo pools along the main channel; it could be from the draining of several low-flow tributaries into the Mara; or it could be from some other source we haven't found yet. To test these hypotheses, it is important to capture water samples during both the rising and falling portion of the flush. Last year, we purchased some automated water samplers that can be set in advance and triggered to start sampling when the river rises to a certain level, in order to better study these events.

As you may have seen from the falling depth gauge on the top right corner of our blog (or under the Mara Live link), the river has been steadily falling over the last month, and getting to very low levels. Last week we spoke with Brian Heath, Director of the Mara Conservancy, and he told us that big rains were going to start in the next week. Brian has lived in the Mara for 11 years and knows it incredibly well-- when he says something is going to happen, you should listen! So Chris and I headed down to the river last week and set up our automated sampling machine, gambling that the coming rains would bring about a large flushing event

Yesterday, we awoke in Narok to a text message sent from our real-time water quality meter that the river had risen 3 feet and the dissolved oxygen (DO) had crashed to below 20%! Hopeful that the automated sampler had worked as planned, we hopped in the car and headed back to the Mara, arriving just as the levels were beginning to return to normal.

Excitingly, we arrived just one hour after the sampling program had been completed, and everything worked! The sampler had triggered after the river rose about 6 inches, and had taken samples all through the rising and falling limb of the flood! Now we can analyze these samples to determine where the water came from that caused the event, how much hippo feces it was carrying, and how much microbial activity was occurring in the river. This translates into us having a lot of filtering to do!
Posted by Amanda at 9:27 AM 3 comments:

October and November were rough months for us, in which we were hit with a series of challenges that really set us back a bit. Unfortunately, this resulted in us getting a bit behind on our blog updates. I thought I would just give a brief recap here of some of the things we lost, and found, in the last few months.

Lost
Found
I have to admit this series of events left me feeling a bit vulnerable to all the dangers and challenges that surround and await us, but it also ultimately made me feel very blessed to be as fortunate as we have been... and maybe a little more wary of dogs.

Anyway, we've been back in the field the last few weeks, busily trying to catch up from some of our unexpected delays, so we have lots to post about in the upcoming weeks. Fish sampling, leopards in camp, nutrient chemistry, and gambling on a DO crash... stay tuned!
Posted by Amanda at 11:01 PM No comments:

Processing samples late into the night... As a baby bat sits on our tent watching us... 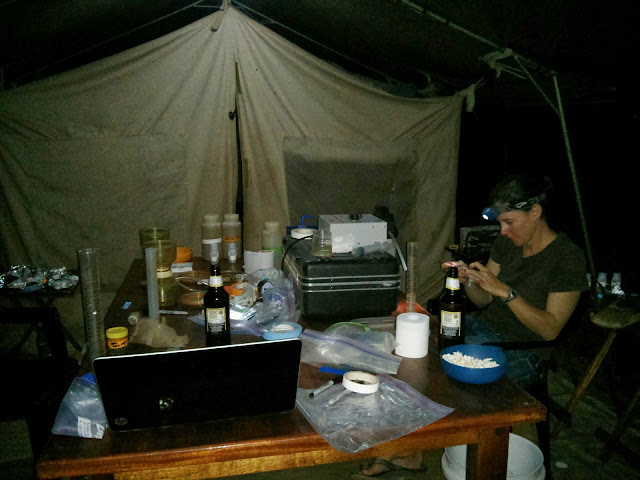 Posted by Unknown at 5:36 PM No comments: