David arrived in the Mara about 2 weeks after the big wildebeest die-off event in which nearly 5,000 perished, but he was still able to see the remnant carcasses piled up in the river. However, near the end of his stay, another fairly large die-off occurred in the river, which gave him the opportunity to see this event firsthand. After receiving notice about the event from Brian Heath, Director of the Mara Conservancy, we headed immediately to the location to conduct a carcass count.

They were much easier to count fresh, although it's still difficult to keep track of individuals in the mass of bodies washed up on the rocks.

It's very helpful to have two observers present, as well as a hand-held counter! During this event, we counted 590 carcasses.


Since this event, observations from us and others suggest that nearly 1,000 more have died in the river, with several months of river crossings remaining. Much of our research this summer focused on determining the effects these kinds of events have on the river. Some of our data supported our hypotheses, while others just raised more questions.

I'm so fortunate that David was able to visit this summer and spend so much time in the field, observing the river and helping with research. Despite the long hours and challenging conditions, he absolutely overflowed with ideas and questions and thoughts for future research throughout his whole visit. We are really excited about pursuing all these ideas, and we can't wait for David's next visit to the Mara. Thanks David!

Visit to the Ntiakntiak River

Some of the most interesting data we got this summer came from the seasonal tributaries that drain into the Mara River from the Loita and Aitong Hills. One of those tributaries is the Ntiakntiak River, a small seasonal stream that joins the Olare Orok and runs into the Talek before joining the Mara. During David's visit, we traveled to visit the Amani Mara Lodge on the bank of the Ntiakntiak River. A friend of ours from the Mara River Water Users Association, Joseph Kones, is the Manager there, and he had invited us to visit this ecologically-minded lodge. Unlike many lodges which are built in the riparian thickets along the river banks, which encroaches on critical habitat for many wildlife, the Amani Mara is built in the open plains, offering spectacular views and great wildlife viewing. It's also incredibly luxurious, which was a wonderful place to visit after 3 dusty, bouncy, sunny days of traveling around and camping in the Mara.

During our stay, one of the local guides took us on a morning walk along the river. It's a small but beautiful river with unique boulder formations along its banks and lots of wildlife living around it.

It was also interesting to see a pod of about 16 hippos living in a small pool on this river. Given the small amount of water flowing through this system, this pool looked like the perfect place to measure hippo effects on the river.
Fortunately, the owner of the lodge, Ashif Suleman, was very interested in our research and excited about having us collect data on the river, and he graciously invited us back. During our return visit, we got some of the most interesting and clear-cut data of our whole summer field-season. We look forward to doing some more work on this beautiful river!

Email ThisBlogThis!Share to TwitterShare to FacebookShare to Pinterest
Location: Kenya

The Mara in a Bottle

During David's visit to the Mara, we did our first experiment to look at the effect of hippo feces on water quality. Experiments have more power to determine cause and effect than just monitoring and observation, but they can be difficult to do in large systems. So we made the Mara smaller-- bottle-sized, in fact. Chris started with a pilot experiment that we ran for several days, even as we traveled around the Mara. Here are Chris and David collecting data from the experiment from our mobile laboratory. 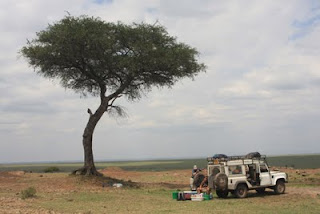 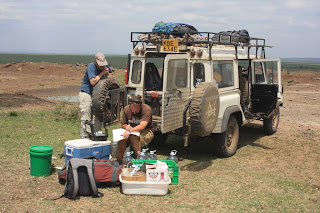 After we got some really exciting initial results, we decided to scale up the experiment to bigger and more bottles. This time we set it up at our camp and devoted several days to collecting data. The best part was that we got to purchase a kiddie pool to maintain a consistent temperature-- I can't wait to relax in this once the experiment is done! 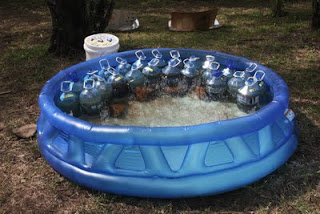 Although bottles are completely different than the Mara River itself, this experiment gave us some good ideas of what kind of changes hippo feces can cause in the water. Now we can look back at our monitoring data from the river and look for similar patterns.
Posted by Amanda at 7:45 AM No comments:

Both of our last two visitors (JJ and David) have been our first two visitors to see the Big 5 during their stay. The Big 5 is a big deal in safari lingo, and it refers to lion, elephant, buffalo, leopard, and rhino. All safari guests aim to see the Big 5, but most are usually foiled on the rhino and/or leopard. David, however, had some epic wildlife viewing luck during his visit, seeing the Big 5 in his first 48 hours in Kenya! This included seeing a leopard with a kill and a rhino spotted from a hot air balloon. Not bad!

Posted by Amanda at 7:26 PM No comments:

During my labmate JJ's visit, we built and deployed a fairly large experiment at three different study sites. The experiment was designed to determine what nutrients limit river productivity both above and below the effects of large wildlife. After sitting in the river for three weeks, we pulled the experiment out during my advisor David's visit. I doubt either of these guests knew how much work was in store for them in the Mara, but they were both incredibly gracious and helpful field assistants.

Here we are pulling the arrays out of the river. 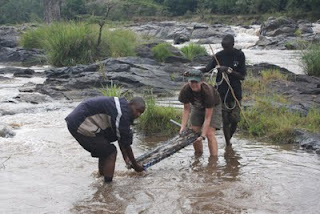 Each array had 60 cups with different types of nutrient additions and different substrates for algae to grow on. To my amazement, we only lost about 7 samples out of a total 180! Here is one of the cups with some algae visible. 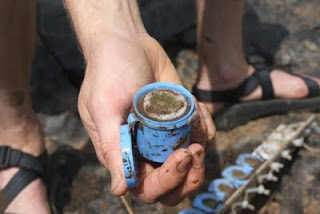 After we removed the substrates, we used several different techniques to determine how much algal and microbial activity there was on each substrate. Here's David measuring dissolved oxygen on the bank of the Mara with Paul and me. 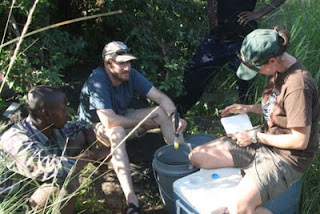 Here's David... still measuring dissolved oxygen, now with Paul and Chris. It took about 8-10 hours to pull and analyze each array, so this resulted in a lot of time spent sitting on the riverbank. 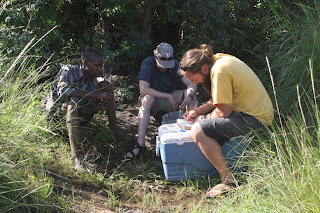 After hours doing the experiment, we still had our routine sampling to do, including sampling macroinvertebrates and periphyton. 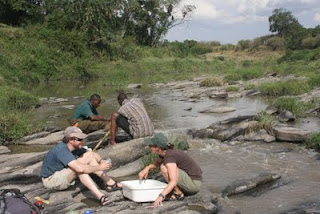 David has done this kind of sampling in rivers and lakes around the world, so to have him help out with this work was really invaluable. I really appreciated how enthusiastic he was about collecting this data, despite the many, many hours we spent baking in the sun doing it. Thanks David!
Posted by Amanda at 6:54 PM No comments: 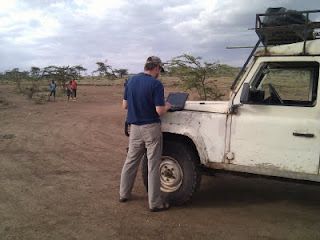 Posted by Amanda at 9:41 PM No comments: 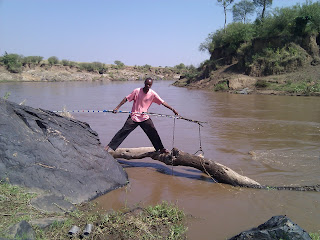 One of our water meters has been stuck in the river for the past week. Big rains and high flows wedged it into some rocks and we have been unable to pull it out. Today, our field assistant Paul came up with a brilliant idea to get it free, and he successfully rescued it from the river, without even having to go swimming. Just in time, too, as we are closing out our field season this weekend. Great job Geemi! Now we can go celebrate!

Freak hailstorm in the Mara

Right after we pulled our lowest meter and depth logger...a freak hailstorm hits the Mara. Not the best timing but the first hailstorm we've seen here in 3 years. 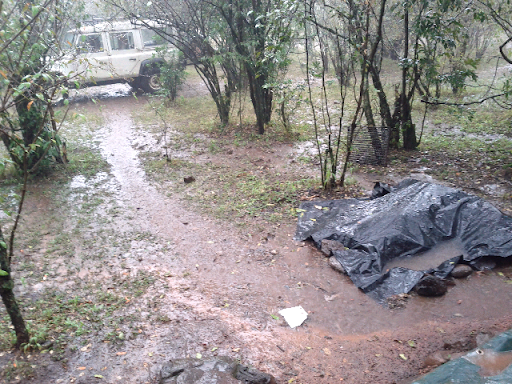 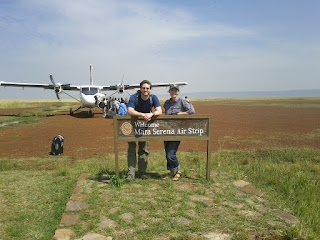 My advisor from Yale, Dr. David Post, just spent 9 days with us in the Mara, and we had an amazing time traveling through the basin with him. David has researched how animals move nutrients across landscapes in several different systems, so his perspective on wildlife effects on the Mara River was invaluable. As usual, we stayed very busy during his whole visit-- we sampled half the length of the Mara inside the reserve within hours of his arrival!-- so I'm just now catching up on sharing some pictures and stories from his trip. Stay tuned for more...
Posted by Amanda at 9:53 AM No comments: 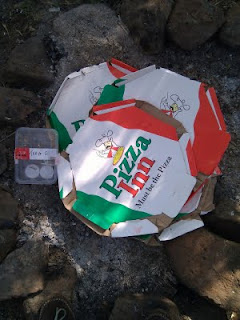 Posted by Amanda at 8:55 AM No comments: