After a year of manuscript revisions and the peer-review process, my first publication from my Master's Thesis has now been published! 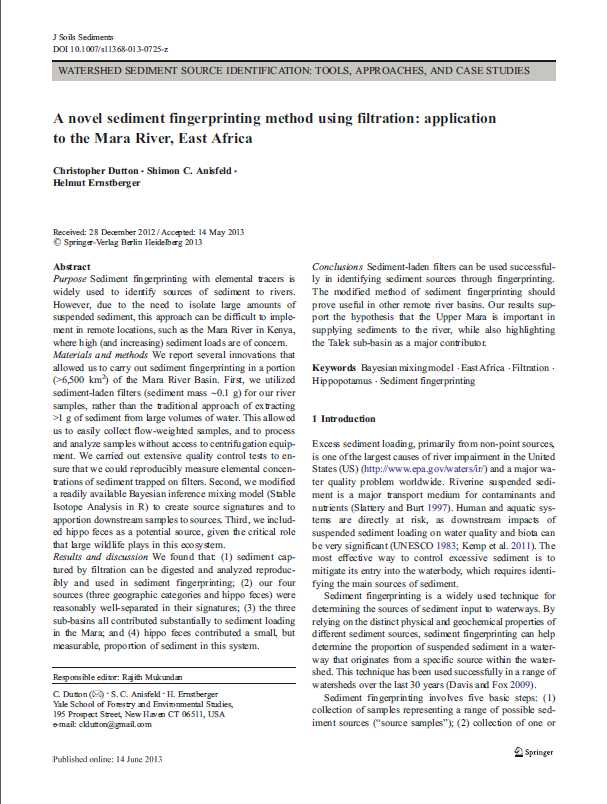 Three Days at the Zoo

Working at the Milwaukee County Zoo, we spent three days developing a "hippo budget" to be able to compare what goes into a hippo with what comes out. To know what went in, we weighed and took samples of all of their food each morning. To know what came out, we filled the hippo pool with clean water each morning before letting the hippos in, and we collected a sample of this "Before Hippo" water. Then we let the hippos spend 24 hours wallowing in the pool. The next morning, after the hippos had been moved into nearby cages, we took a sample of the "After Hippo" water. It was amazing how much the water changed from Before to After! Then we slowly drained the pool through a mesh seive, and shoveled out and weighed all the feces, totaling over 1,110 pounds of hippo poop in three days!
Want to catch a glimpse of what all this looked like without getting your hands dirty? Check out the time-lapse video below...

Posted by Amanda at 8:26 PM No comments:

In our research, we have been trying to understand what effects hippos have on the river. Although we have studied this in many different ways in the field, it's difficult to completely isolate the effect of hippos from everything else going on, and to say that the changes we observe in the river are due to hippos alone. Scientists often deal with these kinds of challenges by developing controlled experiments, where only one variable is manipulated, and effects are measured. However, hippos are rather large and imposing creatures to try to "control." Imagine trying to get them to use one hippo pool and not another, or to get in and out of the river on command.


I was discussing these challenges with my labmate, J.J. Weis, who worked with us in Kenya in 2011, and J.J. suggested we think about working with a zoo, which often have hippo pools in fairly controlled conditions that can be measured before and after the hippos spend the day wallowing in them. J.J. and his Aunt Judy put us in touch with the folks at the Milwaukee County Zoo, which has three resident hippos and an ideal setting for this kind of study, and they were really excited about the idea. After we submitted a research proposal for their review, they invited us to give it a try.
I have to admit I was a bit nervous about how well this would work. In theory, it seemed simple: fill a pool with clean water, take a water sample, put in a hippo, take out the hippo, take another water sample. However, our primary concern was not interfering with the hippos' (or the zoo's) normal schedules, so we were ready to be flexible. However, everything went incredibly well, and we had a wonderful time getting to spend three days behind the scenes at the zoo. During our time there, we worked closely with Erin and Bridget, two hippo/elephant keepers who were not only really friendly and passionate about their jobs, but also willing to help us shovel hippo poop for three days!
We also got to spend a lot of time watching and getting to know the zoo's three resident hippos-- Patty (the matron), Puddles (her daughter) and Happy (the big male). It was fascinating learning how different their personality types were-- for example, Patty and Puddles went everywhere together and were generally pretty willing to follow directions from the keepers.
But Happy, a very sensitive hippo despite his impressive size, was generally a little more stubborn. He was often unwilling to leave the pool until it was drained around him, and he always resisted moving from one part of the habitat to another, despite continued pleas and bribes.
It was also just amazing to see these beautiful creatures up close-- an experience we're happy to avoid in the field. They are unbelievably huge-- Patty and Puddles both weighed about 3,000 pounds, and Happy weighed almost as much as the two of them together at 5,700 pounds! He's more than 5 feet tall and 11 feet long, and standing next to him, even through a cage, is an awe-inspiring experience.
But they're also surprisingly delicate animals-- they like to have water sprayed on them, and while the pool was being cleaned, they would curl up next to each other under the soft spray of a hose and look like large puppy dogs.
Not only did we end up getting some great data from this time at the zoo, but I ended up being even more fascinated by and enamored with hippos than I was already!

Posted by Amanda at 8:20 PM No comments: