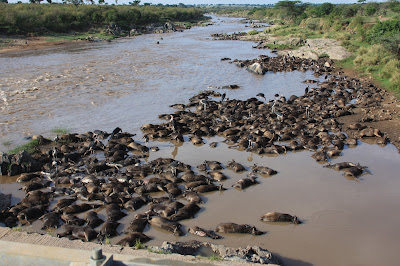 This week our scientific paper on wildebeest mass drownings in the Mara River was published in the Proceedings of the National Academy of Sciences. It is so exciting to finally publish this research, which essentially began with our first observations of wildebeest carcasses in the Mara River in 2008. Over the years, we have spent hundreds of hours (at least!) observing wildebeest crossings, counting carcasses, collecting water and tissue samples, measuring nutrient chemistry and stable isotope signatures, analyzing data, and writing up this manuscript. After completing the paper, it then went through a rigorous peer review process and months of edits and additional data analyses. Throughout this process, our understanding of the scale of these drowning events and their ecosystem effects has continued to evolve.

We have now shown that mass drownings occurred in 13 of the last 15 years in the Mara, bringing an average of 6,250 carcasses into the river each year. These carcasses equal 1100 tons of biomass, which contributes 107 tons of carbon, 25 tons of nitrogen, and 13 tons of phosphorus to the river each year. About half of the carcass is soft tissue, which decomposes within weeks to months. The other half is bone, which decomposes over 7.5 years, slowly leaching nutrients, especially phosphorus, into the river. The carcasses alter nutrient cycling in the river and provide important resources for a range of terrestrial and aquatic scavengers. When carcasses are present, they comprise up to 50% of the diet of fish in the river. Even months after carcasses have decomposed, the biofilm that grows on bones continues to be an important food resource.

This paper represents our efforts to understand the natural phenomenon of mass drownings in one of the few places left on the earth where you can study the impacts of large animal migrations on unregulated rivers, and it helps give us a window into what other rivers may have looked like when large animal migrations and unregulated rivers were still common features of our landscapes. It also charts a course forward for us in terms of the next set of questions to investigate. As we take a moment to reflect on all that has gone into the development of this paper, I thought it would be interesting to look back at some of our old blog posts as we studied these events.

The first time I witnessed a drowning happening

Early thoughts on bones in the river
Posted by Amanda at 4:18 PM